Nothing is more exciting for young livestock exhibitors than getting new show prospects into the barn. For many youths with winter shows, it won’t be long until it will be time to start picking out and bringing home new show pig projects. However, there’s not much more frustrating than battling a barn of sick young pigs that go off feed early on.

With proper sanitation, health and nutrition practices, keeping new pigs coming into your barn healthy and happy can happen. Ashley Denton is a high school agriculture teacher and FFA advisor in Perry, Ga. After tragedy struck their school’s show barn during Thanksgiving break in 2017, burning the pig barn to the ground, the school was able to rebuild, with the generous support of donors from across Georgia, the country and Hog Slat Inc., who donated the majority of the material for the reconstruction. Now, the school can house 66 show pigs for its students, and with that many pig projects, Denton has a plan in place to keep the pigs healthy and performing.

Sanitize and Set a Schedule

Denton said the last of their “summer pigs” will show in early October at the Georgia National Fair in Perry. Once all the pigs are out of the show barn, the entire barn will be cleaned and disinfected, including the walls, pens, panels, waters and feeders. She is a firm believer in getting every inch inside the barn thoroughly cleaned and disinfected between each group of pigs.

Once the barn is clean, it usually sets empty for a short period of time. The students in the Perry High School program are responsible for sourcing and purchasing their own animals. The school provides a place to house them and provides training on animal care and management. Since there are so many students and their parents buying show pig prospects to fill the 66 pens, Denton said she limits the time pigs can come into the barn each season.

“They come from a lot of different places and share a lot of different germs. October 20 through November 4 is the time period to bring new pigs in this year. Our new barn holds 66 pigs, and it will be full come this fall,” Denton said.

She said since the students and their parents are the ones buying the projects the pigs do come from across the state and from various states. The shortened time window for receiving the pigs into the school barn shortens the amount of time that any sickness might strike, and it helps ensure that all pigs get onto a similar health protocol from the get-go.

“If the pigs are going to get sick, they will get sick at the same time and we are able to treat them at the same time. That way we don’t have pigs bringing in and spreading sickness later in the season,” Denton said, who has been teaching in the Perry school system for 10 years.

As each pig is unloaded into its new pen, it is given a dose of wormer Then, approximately two weeks after the receiving window ends, all pigs are vaccinated for flu, PRRs and Myco/Circo to get them on the same health program. Denton said each month all pigs are given a round of wormer to help prevent parasites.

Another proactive tactic that Denton and her students take is using the medicator attached to the waterers in their barn to keep the pigs healthy. Initially, she runs a dose of oxytetracycline through the water, at the recommendation of a local veterinarian. Once the medicine has run its course, she adds Vita Charge® Liquid Boost® to the medicator to support digestive health and promote feed and water intake. The key ingredients in the Liquid Boost are Amaferm®, a precision-based prebiotic designed to increase intake, digestion and absorption, and MOS to trap and expel bad pathogens from the gut.

“It’s really important to keep them healthy and keep them eating through the show season. Our pigs have a minimum and maximum weight of 215 pounds to 285 pounds; it’s difficult when a student’s hard work comes to a halt when their one pig decides to go off feed, preventing them from hitting that minimum weight target,” Denton said.

She said in their old barn before using the medicator, they might have nearly at $10,000 vet bill each year just to treat sick pigs, and that maybe 10 pigs would not make weight due to going off feed. Last year, their treatment bill was significantly reduced and only 2 out of 66 pigs were too light.

In addition to a pre-sanitation cleaning and a sound health and nutrition program, the students maintain a strict bio-security program to ward off any unwanted germs. Because some who have daily contact at the school’s farm also have their own pigs at home, including Denton, there is a disinfecting mat to walk through before entering the premises. There are also disposable booties for students and other visitors to put over their shoes after disinfecting. For the students who house their projects at the school’s barn, they keep separate shoes, all their feed and supplies in a building next to the barn.

Denton said after the animals travel to any shows they are washed and sprayed with prolate before returning to the barn. And all pigs are wormed again after each show.

“We try to minimize whatever we can bring into our barn from other barns. The students understand the importance of bio-security,” she said.

Getting new show animals should be an exciting time. However, commingling does have its challenges, especially as the number of animals you add to the barn increases. If you are truly concerned about your animal’s health, take its temperature or call the veterinarian. Your animals should run a normal temperature, have bright eyes, noses that aren’t runny and maintain a healthy appetite.

Taking preventative measures and being proactive with your sanitation, health and nutrition program can take the stress out of introducing new pigs to your barn and bring the excitement back so you can focus on getting your pigs growing instead of treating them for sickness. 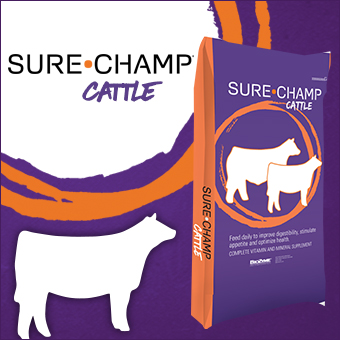