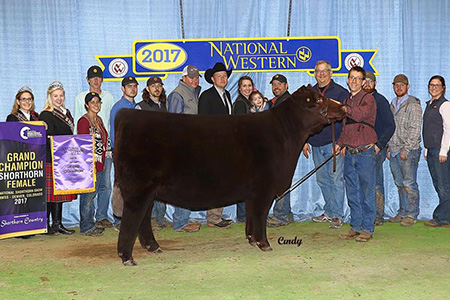 “We used Sure Champ® Climate Control paste (transitioned to Vita Charge® Climate Control Gel July 2019) for the first time at the 2017 National Western Stock Show and had great results. We used it on our two big heifers because we knew it was going to be warmer than what they were accustomed to at home. We had already used the Vita Charge® paste (transitioned to Vita Charge® Gel July 2019) regularly before and at a show. Nonetheless, when we combined the two the cattle seemed to stay comfortable in the stuffy barn and filled up perfectly on show day. One heifer won her division and the other was the Grand Champion Female for David Smith. I also used it on a bull calf I had that always stayed pretty empty at shows. He filled up the best he ever had at Denver and ended up being Reserve Grand Bull. I will use this product again and again. I am anxious to see how it works in the summer shows especially.”