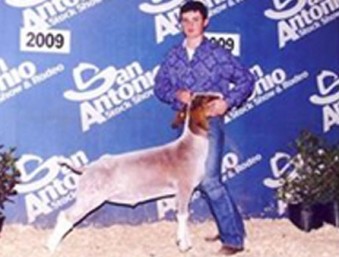 Jesse Luke clearly has the bragging rights for his grandson, John Landon Luke of Burnett, Texas and their show goats. John had 2 Grand Champions and 2 Reserve Champions in 2007 and 2008. And he broke the record this year in San Antonio 2009 when his heavy weight market goat brought $50,000!