Sale day at the livestock show. It’s a day full of emotions – nervousness about letting go of an animal who’s become a pal; excitement about reaching the pinnacle of a show season; and anticipation about the selling price, the reward for months of hard work and dedication.

As the auctioneer begins his chant to change ownership of those prized animals, are you confident – as a sale chairman or as a parent – that the youth you represent will get a fair reward for their investments?

If you can answer “yes,” then you’ve likely done the legwork required before the sale to secure quality buyers, to show your appreciation, and to convey the value of supporting the youth livestock auction.

But, if you’re not so confident, then maybe it’s time to reevaluate your buyer relations.

So, what if your community isn’t filled with large-scale businesses, able to make large purchases? Maybe it’s time to form a group dedicated to collecting money that can be compiled to make those purchases.

Whether it’s a large show, such as the Fort Worth Stock Show, or a smaller event, such as the Canadian County Free Fair in El Reno, Okla., this idea has been proven to work.

Later, he became involved in raising funds for the Stock Show Syndicate – a group comprised of 122 Fort Worth-area businessmen who purchase livestock during the Sale of Champions. Today, White serves as chairman of the Fort Worth Stock Show Goat Club and the Fort Worth Businessmen, which is an offshoot of the Syndicate.

“Year by year and dollar by dollar, we help these kids,” White says. “There are many good charities out there. But, if someone says they’re going to match you dollar for dollar, as we do, you know it’s the real deal.”

And, the real deal it is. The 2015 Fort Worth Stock Show auction raised in excess of $3.7 million for the youth livestock exhibitors, $400,000 more than last year’s record total. And, since 1980, the Stock Show Syndicate has been able to award more than $20 million to livestock participants.

“That’s a lot of money in this economy, and it goes to the kids,” White says. “We’re trying to help our future here. And, their hard work does pay off.”

White says, when you make a donation yourself, it builds trust when trying to secure new donors for the cause.

“You have to lead by example,” he says. “There are many really great charities. When you send your own money, and you can look people in the eye and say, ‘I’m doing this for the kids,’ They’re more likely to give it a shot.”

This mentality not only works on a large, statewide show. It can be effective on a county level, as well. Rhys Cole, El Reno, Okla., is an active participant in the El Reno Buying Group.

This group of 4-H and FFA parents works on behalf of El Reno exhibitors to secure funding for their auction participants. Cole says this group developed out of necessity in 2002.

“Our kids had gone through the Canadian County livestock sale and were pretty much embarrassed with pigs bringing $1 to $1.10 per pound – even the grand champion,” he says. “As a parent group, we tried to get everyone involved. If they couldn’t attend the sale, we could at least spend their money.”

Within two weeks, the group raised $14,000 to go toward funding a buying group to purchase animals as syndicates, Cole says.

“Our ag teacher had tears in his eyes,” he says. “He said he didn’t have to worry about his kids in the sale ring, and he could focus on them having a good time.”

Each year, the group’s success increases. In March, the El Reno Buying Group raised $27,500 to be used for purchasing and adding-on bonuses for the El Reno exhibitors. In all, more $220,000 has gone toward these exhibitors.

Cole says the key to success is to get all parents involved from the start. “We have new parents coming in all the time,” he says. “We show them what to do and encourage them to bring new companies and individuals in.”

They ensure repeat support by showing their appreciation. Once the sale is complete, El Reno exhibitors hit the streets in groups of three or four – decked in 4-H or FFA jackets – to personally deliver photos of either the El Reno show team or animal purchases to each buyer.

In addition, each El Reno 4-H and FFA member mails a thank-you note to every donor of that group – whether or not that business purchased his or her animal.

Because of the follow-up of the El Reno exhibitors, Cole says, a first-time donor often becomes a loyal one.

“We have a good time raising the money, and now it’s pretty simple,” he says. “I can raise about $3,000 in 20 minutes. They can see those little ol’ kids grin and smile when their animal brings $4-5 a pound. And, they litter their lobbies and front offices with those thank-you cards – they’re really important.”

Cole says the feeling donors receive from being involved encourages them to remain involved.

“Going to someone and asking for money is one of the hardest things to do,” he says. “But once they support these young people, their life changes. It’s not a little ‘nothing’ deal.” 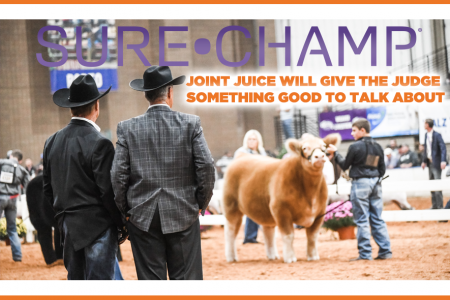