Over 1,000 exhibitors gathered at the Lamar Dixon Exposition Center the last weekend in February for the annual LSU State Livestock Show. As usual, the barn was full of more than just showmen. It was full of families; dads, moms, sisters, brothers, grandparents, cousins, etc. In the swine barn, there was a banner hanging that read, “livestock families raise winners.” Little did anyone know, the conclusion of this show would prove just that.

The swine show concludes with the grand drive on Saturday afternoon. Like any other show, it was intense. Kids and families work year-round, spending long hours in the barn to make it to that very drive. However, hard work is only part of it. Luck, the judge’s preference, keeping animals healthy, and the animal’s attitude all must line up in your favor. All of that itself is a major accomplishment.

Saturday morning was no different than normal. The kids in that drive were honored to be there, but each also wanted more. Each and every one of them wanted to win as bad as the other – trust me. But, the thing is, only one would ultimately be the Grand Champion.

After the 30-minute break, the stands fill up, everyone guessing how this will all play out, taking bets, mind-reading – the whole nine yards. The moment was there. The judge gets on the microphone and gives his spiel and concludes with, “I will now go slap your champion on the back.” What seemed like forever passed and then the judge made his selection. Bryce Hebert, exhibiting a crossbred gilt, was named the 2015 LSU Ag Center Grand Champion Market Hog. Usually that is the climax of the story, however, this time it wasn’t.

Not even a second after Bryce was named champion, his twin brother, Brody hurdled the ring fence and tackled him. The two boys lay in the ring in tears of pure excitement and accomplishment. The two 12-year-old brothers who saw their hard work pay off. Not for a second was there an ounce of jealousy wishing it would have been the other. The two of them were merely overjoyed watching dreams come to fruition and that everything had finally lined up for their family.

Just when everyone thought this couldn’t get any better, it did. Like I stated earlier everyone in that drive wanted to win as much as the other. One of those exhibitors was Logan Hebert. When Bryce was named Grand Champion and was immediately tackled by his twin brother, Logan instantly left his hog, which was still vying for Reserve Grand Champion, and joined the two brothers crying on the ground and hugged them both in pure happiness. Logan was as overjoyed for that family as he would have been for his own if named champion. Realizing that he still had a hog to show Logan got up and started to walk toward his hog, but detoured on the way. Logan then took the time to walk out of the ring and congratulate the father of the Bryce and Brody before returning to the ring to get back to his barrow, that was named Reserve Grand Champion shortly after.

I think that I can vouch for everyone in the barn that there wasn’t a dry eye in the stands as we were all reminded why it is we show livestock. Of course everyone wants to win, but at the end of the day winning really isn’t everything. It is actually a very small thing in the scheme of it all.

Parents don’t spend that much money and time to just win. They do it to raise kids like the Hebert boys. In the process of raising good livestock, good kids are also raised. The father of the champion, Mr. Nickie Hebert, stated on Facebook the next day, “I have always said that kids help raise these hogs, but these hogs help raise the kids.” That statement, as well as the sportsmanship showed that day, proved just what this industry is about. It is about raising livestock, but more importantly about life. There is no better classroom than the barn. No classroom can compare to the barn. The show barn is where we learn the most valuable lessons. We learn that we can’t always control decisions made, that hard work does pay off, that sometimes in life you lose, we learn how to put in long hours, we learn what hard work means, we realize the right way is the only way, and so much more.

Times like these we take a step back and look at why this program was started and why it so important. It is about so much more than feeding the best animal out there. It truly is about raising good kids who possess great morals and ethics. Simply put, livestock families are truly raising winners. 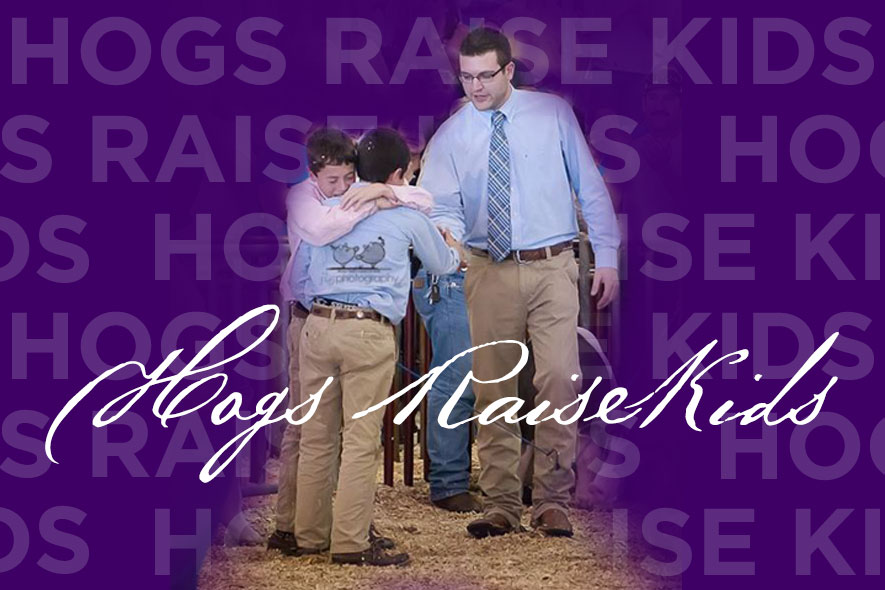