Austin Pueschel says that showing pigs is his favorite sport. After spending 11 years in the show ring, it’s no wonder he feels confident packing a show box. This Sturgis, Michigan native majors in agribusiness at Iowa State University and works for Win-Mor Farms. Pueschel travels to swine shows nearly every weekend and says there are necessities in his show box that he simply won’t leave home without.

Most recently Pueschel added two big titles to his banner wall. In November, he won the senior showmanship division and his crossbred gilt was Grand Champion Market Hog at the North American International Livestock Exposition (NAILE). Pueschel says the awards he took home from the NAILE still haven’t sunk in. 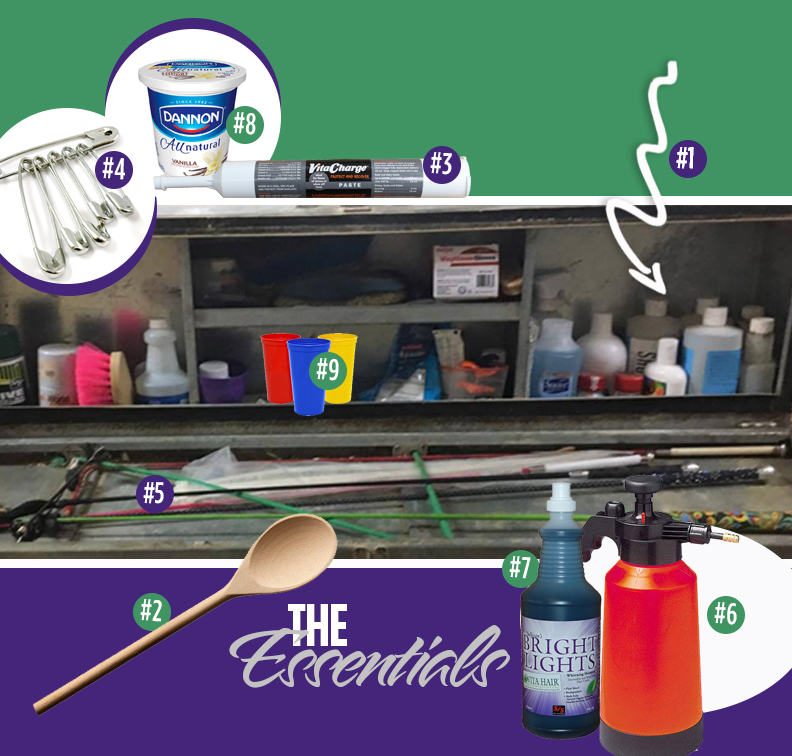 “I am still trying to process it and go with the flow,” Pueschel says. “I only took one pig and she was temperamental, so I was always worried about how she’d do in the ring. Toward the end she got a bit cranky, but obviously she held it together.”

Pueschel credits his success to his home team, starting with his dad. His family is immersed in showing, and Pueschel appreciates the life skills he’s picked up along the way. He says winning the NAILE showed him the network of livestock people in his corner.

“I was most surprised with the amount of people I’ve connected with throughout the industry,” Pueschel says. “The texts and messages I’ve received was a very humbling moment. I feel like it’s our own little show family. Since I was never very good at athletics showing became my sport.”

Pueschel says his dad taught him to pack a show box, and he’s willing to share the top items he never leaves home without.

Hair care products: Pueschel likes Peppy and Show Appeal to use on his pigs at shows, and when he is at home he uses Revive to keep the animal’s hair shiny and healthy.

Wooden spoon: This tool is used to mix feed at a show, and prevents Pueschel from getting too dirty, especially for the feeding that takes place a couple of classes before he goes in the ring.

Vita Charge® Paste: The Pueschel family travels to jackpot shows almost every weekend, which means their pigs are exposed to various temperatures and germs at every turn. Since they began using Vita Charge Paste (transitioned to Vita Charge® Gel July 2019) one year ago, they haven’t had any problems with pigs going off feed. Pueschel says they are sure to feed it the night before they leave and at the show to avoid stress.

“We put our pigs in a lot of stressful situations and our pigs never miss a beat, and we really attribute that to the Vita Charge we give them,” Pueschel says. “They always get up morning and night and go to the feed.”

Lots of whips: Pueschel says he takes every whip he can find from the barn at home and puts them in the show box. His biggest pet peeve is not having the right whip at a show. Pueschel likes them to be sturdy, not floppy, and on show day he searches in the show box until he finds the one he’s most confident with.

Water Sprayer: Most folks might know the sprayer Pueschel uses because it is decked out in blue and purple cheetah print tape. He says his sister decorated it years ago and though he’s used other sprayers, those always seem to walk away at a show. The cheetah-print sprayer doesn’t go missing.

Bright Lights soap: This product is important to Pueschel at home and at the show. He does use cheaper soaps at home too, when he’s washing them every day, but Bright Lights is a must-have at jackpots, state fairs or major shows. He says this product removes stains, keeps the white at its whitest and darkens the colored spots.

Yogurt: The Pueschels love to use yogurt to introduce new feed to their show pigs. It also helps the animals stay on track while they’re at shows.

Feed cups: Pueschel says he typically takes too many of these, but he does use them constantly at the show. He takes several from home and packs them on top of the six to eight cups he consistently keeps in the show box.