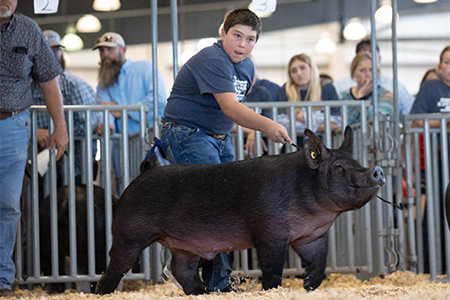 “We raised this barrow, Hollywood, that our son Kasen won Reserve Grand Champion Barrow with at the Kansas Junior Livestock Show. The barrow has been on Sure Champ® Joint Juice since he’s been about 100 pounds until the KJLS in October. The judge said he had never seen a hip and hind leg utilized so well, and this guy could go all day long in the ring at 300 pounds. This was the day after Kasen used the same barrow to win reserve Intermediate Champion in Showmanship the night before. We used the Joint Juice on some other pigs this year and felt it works great!”