Growing up, showing your own livestock and being the child of a distinguished livestock evaluator isn’t always easy. Just ask Mark Hoge. However, because he “suffered from the randomness of being Dan Hoge’s son,” he decided early on, if he was ever afforded the chance to judge a show, he would be positive and do what he believes in.

“I always told myself if I ever got the opportunity to judge I would do two things. Number one, I would be positive. There’s too much negativity in the world, and the worst four-letter cuss word that exists is the word hate. And then I would always do what I believed in. I would never let the power of the show ring and politics influence what I wanted to do as an evaluator because I was subject to the randomness of that. Sometimes it worked out for me, sometimes it didn’t,” Hoge said. “I think the livestock judging ring is a sacred ground that should be well cared for and well managed for by the exhibitors and judges. Sometimes you learn more from what not to do than what to do.”

So that younger Mark Hoge took those lessons he learned early on to follow his passion for people and livestock. Today, he is an Associate Professor of Animal Science and Livestock Judging Coach at Western Illinois University in Macomb. He judges livestock shows of all species across the U.S., and he and his family raise and show livestock competitively in a variety of show rings from cattle to sheep to goats and hogs.

Hoge said he has one requirement when judging a pig show. Each pig must enter the ring individually so he can get a preliminary view of each animal from multiple angles and evaluate each animal before making any comparisons. After getting a front, side and rear view of each hog in a class he can start comparing the animals and deciding on his placings.

“I look at each pig individually because I think an evaluator needs to look at each head of livestock individually before they start to make relative comparisons because if we go into a show and say this one is bigger, faster, stronger, stouter, instead of looking and saying I like this animal or I don’t, we start actually losing sight of what we like. Then the population at the show determines what we like instead of our core values, or what we stand for,” Hoge said

When sorting market hog classes, Hoge places emphasis on muscle, width and stoutness and then balance and structure. He looks for similar traits in breeding gilts, though his priorities change just slightly to put more importance on structure and balance. He said he has never selected a market gilt that he wouldn’t breed in a replacement setting. He said the key there is balance, and a breeding gilt must have balanced traits and not be too extreme in any one area, throwing her balance off.

“My priorities, without a doubt, are muscling and length of skeleton, then we call it genuine. What does that mean? They are stout featured; they are bold, and they are powerful. Then we look at balance and structure. Our goal is to push the envelope of width and muscle and never compromise the ability to get out and move with good structure,” Hoge said.

Hoge knows the preparation that goes into working with show pigs before they get to the show, especially with show pigs that must be broke to drive and aren’t controlled by a halter or leading. He said he can tell when an exhibitor walks through the gate if they have put in the hours of preparation needed to win and if they have the desire it takes to hang a banner.

“You can tell when the gate opens if the showman has the eye of the tiger look. That focus, that drive, that tenacity, that desire, that passion to want to win. That is the first thing I notice. If they do have that, they will be a very good showman. It’s all based on that look in their eye; their desire to want it – to want to be something greater than average,” Hoge said.

That passionate look has rarely failed him, and as a judge, he doesn’t want to fail the exhibitor either. He can tell if he gestures an exhibitor to the second or third place that they sometimes feel defeated, but his hopes are that they still remain positive, listen to him describe the strengths and weaknesses of their pig and leave that show knowing they got a fair evaluation and how they can perhaps work on their weaknesses before their next outing.

Getting to the ring with that determined look and the ability to drive your pig so the judge can get a good look at various angles doesn’t just happen, especially if you are new to the pig project. Hoge offers some sound advice as a father of three who often has kids showing different species in different states: surround yourself with good people and be loyal.

“Build relationships with influencers. Not pig traders or cattle traders. But with families and breeders who will help young people reach their goals. Surround your children with good people who have the background, knowledge and experience and that you can put them in a truck with and send them on a long journey and be comfortable in your own mind as a parent that your child will be well-cared for and will have a great experience and will learn. That is what we call influencers.”

Finally, he said it important to be loyal to a breeder or seller and also to a feed brand so the young exhibitor can become accustomed to feeding a specific genetic line or specific feeding program. Although not every animal will take to feed every time, Hoge said these loyalty experiences are part of building relationships and teaching best management to the exhibitor.

The journey with your show pig project starts with building relationships, working with your pig and ensuring you have a heavy muscled, wide chested, long-bodied, nicely balanced hog that can track with width and flex. When you enter the ring, show the judge your desire to win, the passion that is in your heart and that you’ve done all you can to #PreptoWin at home. It’s time to be greater than average. 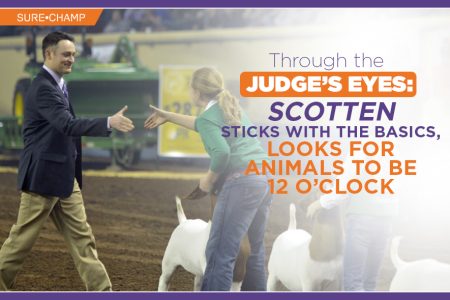 Spencer Scotten knows what it takes to make a champion. And his criteria for a champion market goat or breeding doe probably aren’t too much different than any other judges since he’s looking for a balance of width, muscle, boldness, balance and structure. However, when an exhibitor hits the ring, his or her goat best be dialed […] 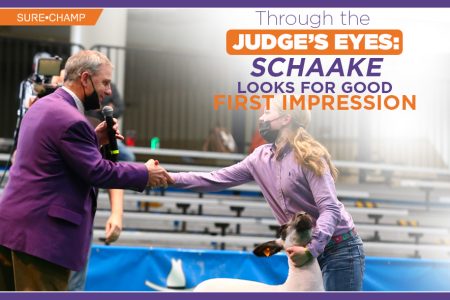