Showing livestock is about more than taking home banners and ribbons. That’s what everyone says.

Besides the lessons of daily responsibility, winning and losing with grace and feeding and caring for animals, there is also a lot to be learned in how to be thankful. Livestock shows don’t happen without great leaders, even better volunteers and lots of financial support.

When T.R., Dax and Colby Putz leave a show they are looking for whom to thank for their experience. They place strong emphasis on saying thank you to judges, ring help and sponsors. The Putz boys say they certainly enjoy the value of showing, meeting new people and hanging out with friends from across their home state of Iowa. But these young men are keen to how a simple thank you might help keep the show industry that they love growing and thriving.

T.R., who is ten-years-old has earned awards in showmanship and exhibiting Champion heifers or steers at jackpots, the Iowa State Fair and the National Junior Hereford Expo shows. Dax shows Hereford cattle as well and his twin brother, Colby, shows chickens and sells eggs. T.R. says the awards make him proud to be a livestock showman and the fun he has makes him happy on the inside. The ribbons and trophies are icing on the cake.

After they get home from a show Dax says he and his mom write down on a piece a paper whom he needs to send thank-you cards.

“I start with, ‘Dear’ and the person’s name,” he says. “Then I say, ‘Thank you for sponsoring my show prize.’ The thank-you card is for the donor so they can feel good inside and proud too. They’re giving us something so we should give them something nice too.”

Dax and Colby say it’s about showing respect and appreciation for the ribbon, premium or prize. The seven-year-old Putz boys prefer to thank people face to face, simply because it’s easier than writing for them. This may make some kids nervous but Dax says it’s really important to try to do.

T.R. says at shows he will listen to the named sponsors announced on the microphone. If there is a sponsor listed to a breed or showmanship award then he will make a note of that name too. At the recent Iowa Beef Expo, he says John Sullivan of Sullivan Show Supply was a major sponsor. T.R. intends to send Sullivan a note of appreciation for supporting such a big show.

“Sometimes they will give a gift bag to every exhibitor and inside might be a new product from Sullivans,” T.R. says. “I think it’s important to tell him thank you because you feel good saying it and he probably appreciates hearing it.” 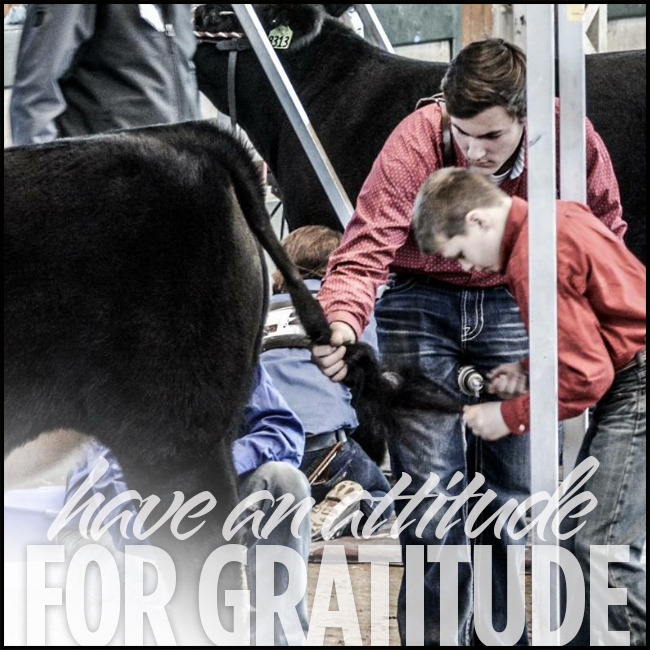 Here are a few tips from the Putz boys on how to say thank you.