Being a state FFA officer is like having a full-time job. The reward, however, comes not in the form of a paycheck but rather in the tremendous feeling of goodwill and the exceptional connections made with people passionate about agriculture.

Stetson Ellingson takes his state FFA officer job seriously. He currently serves as vice president of the North Dakota FFA organization, after being elected in June. Ellingson balances his FFA role with a freshman at Bismark State College, being involved on campus and helping with his family’s registered Angus operation. 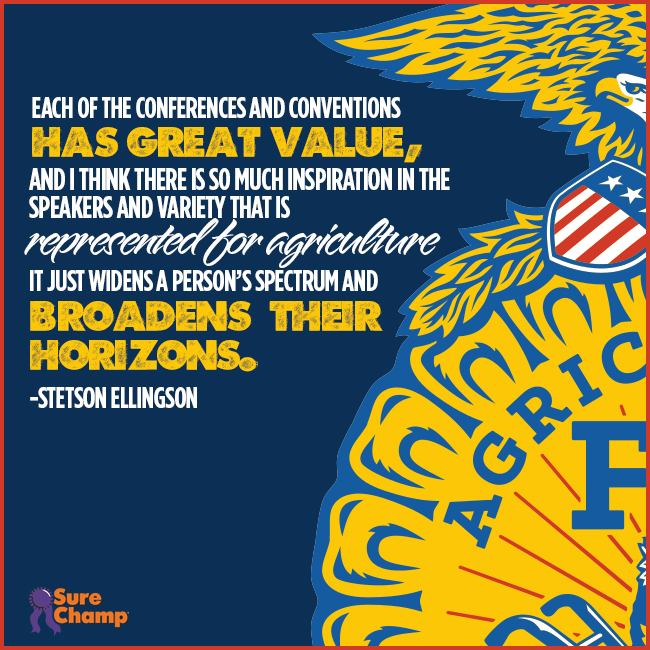 As a fifth generation rancher, Ellingson was exposed to FFA in high school. Knowing he wanted to share agriculture’s story and develop leadership traits, he dived right into FFA activities. Four years later when he was slated then elected as a state officer he says it was a humbling feeling. And now that Ellingson’s immersed in his state FFA officer role, he spends every second he can making chapter visits, talking with sponsors and managing leadership events.

“Being elected is a feeling that’s hard to put into words,” Ellingson says. “I was so honored to be picked by large majority of fellow members that thought I was a strong enough candidate to represent them a whole year. It’s a large role to take on, but I also feel a rush of excitement for what the year holds.”

Ellingson says his state officer team works together to spread the FFA message. They have a lot of autonomy and make choices based on their interaction with FFA members. Their state FFA advisor helps the team along but most decisions about state contests, events and convention are up to his officer team. Ellingson says this role has taken his communication skills to a whole new level because he is constantly meeting new people. He listens to truly hear about their FFA experience then applies it to the leadership position he serves.

“I sit down with everyone I can to hear their story and what their section of North Dakota is known for, what their family does and how they’re involved in agriculture,” Ellingson says. “Even if they do not have an ag background I still want to interact with them. Being an officer is a big decision to make, to commit to a full-time job for an entire year balancing that with school and a paid job on top of that. But I am prepared, and the benefits are immeasurable.”

Ellingson has attended the National FFA Convention numerous times, and this month he’ll serve as a delegate from North Dakota. This will add to his FFA officer job description because national delegates serve on committees and help craft national policies throughout the year. Thanks to his experience Ellingson can offer first-hand tips on how to make National FFA Convention memorable.

Ellingson says any FFA event, state or national convention adds to a person’s FFA experience. Though he’s had low moments, like being a few points shy of placing at a contest or public speaking flubs at his chapter banquet, each one has made Ellingson better and more prepared for the next event. He likes to think of himself as a work in progress, and the more work and effort he puts into his FFA experience the better he’ll become.

“Each of the conferences and conventions has great value, and I think there is so much inspiration in the speakers and variety that is represented for agriculture,” Ellingson says. “It just widens a person’s spectrum and broadens their horizons.”