If you’re showing sheep or goats, you’ve got to protect them from disease and fungus. Maryland native, Cooper Bounds, says that when an exhibitor goes to a show they are picking up disease and fungus from each of the animals that were in the pen before them. These, invisible, lingering germs will make your show project very sick if you don’t take precautions.

Even when the judge handles your animal, Bounds says to think about how 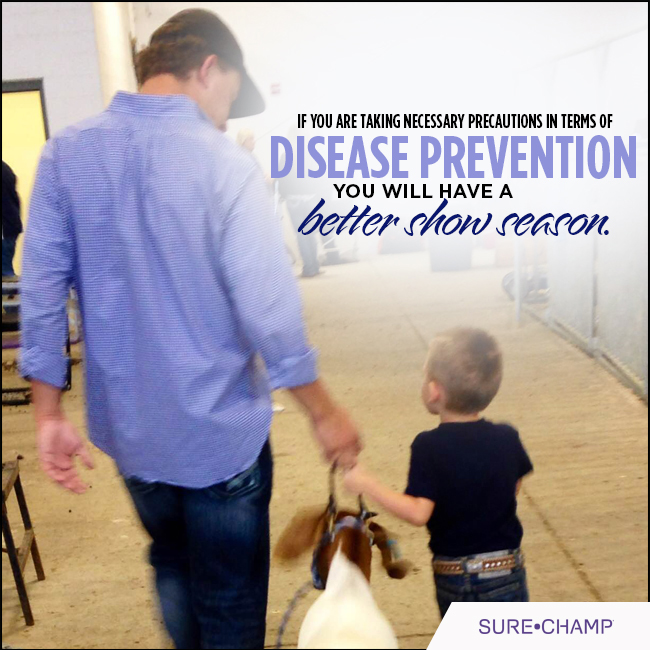 he or she is touching every other lamb or goat before handling yours.

“Each time you go to the county fair, a jackpot or a state show, you have a high likelihood of running into fungus,” he says. “You also need to protect lambs and goats from fungus to be respectful to other showman. It would be selfish to not try to eliminate fungus and disease because you could be transferring it to another person’s animals.”

Bounds himself has shown goats around the country. His family showed all four primary livestock species but had the most success with goats. He works for Kedrick Miller, owner of Miller Boer Goats in Indiana.

There are ways to keep lambs and goats healthy by following a disinfecting protocol. Bounds suggests to show off of a trailer at a jackpot or regional show and avoid bedding down in pens inside the facility. After a goat leaves the show ring, it should be taken to the wash rack and shampooed with an anti-fungal soap. For lambs that have been fit, the same protocol applies. Right after breaking down their legs, Bounds says to get to the wash rack and use Sullivan’s anti-fungal shampoo or Happy Jack Iodine Shampoo to stop disease or fungus.

Many sheep show families will use a lime dip as well. Goat exhibitors might worry about lime dip, fearing it will turn their animals yellow, but he says it actually absorbs into the skin. The goat doesn’t stay yellow, he says, and it is a proven way to kill bacteria.

“Once a sheep or goat is finished showing it’s important to break them down, wash with antibacterial soap, spray with lime dip and get them dry, “ he says. “Then put a blanket on them and you’re ready to load up.”

At home, be sure to wash goat blankets and halters right away to eliminate germs and fungus. In contrast, sheep blankets should only be washed once a year because you want the blanket to build up natural lanolin from the sheep hide.

While unloading your animals at home, take them to the wash rack and complete the process of washing with antibacterial soap and a disinfectant to be sure any remaining disease and fungus does not transfer to your home pens. Once the animal has been washed and dried, then put them in their pen at home.

Though an anti-bacterial protocol is essential it is not foolproof. At home pens must be cleaned out weekly and sprayed with anti-fungal solution.

At a major livestock show like the American Royal or the National Western Stock Show, most animals go through a vet check before unloading or in a separate area away from the barns. This means a team of veterinarians will ask exhibitors to remove blankets so they can inspect the animal head to toe. On sheep and goats, fungus will appear like ringworm, as a circle on the back of the neck, behind its head or down the neck to the top of their shoulder. According to Bounds, it looks like a pus-filled pocket, and if a family can catch it at home they should squeeze the pus out and spray a bleach solution directly onto the sore.

“Early detection is always the best bet,” he says. “If you don’t get it killed right away the hair is going to fall out and the animal will have bald spots that will be very visible. It happened to a goat we showed at the American Royal in 2013. We had jackpotted the goat some and I noticed some of its hair was not sitting quite right on its neck. Sure enough it had the spots so I popped them and cleaned them out to avoid spreading. Thankfully we eliminated the fungus in time because that goat was Reserve Grand Champion overall at the Royal. .”

If there is any question of a fungus issue before an exhibitor heads to a show, leave the animal at home. Trying to pass an infected animal through check-in is not worth the hassle of being sent home or infecting others at the show.

During or after a show it might also be common for an animal to go off feed due to stress. When this happens, Bounds will use a paste like Vita Charge (transitioned to Vita Charge® Gel July 2019) to relieve stress before the animal gets on the trailer. If the show is a two-day jackpot or a long wait until show day he suggests another dose of Vita Charge the night after the show.

Most importantly, watch each animal for signs it is getting sick. Be sure to consult your veterinarian about what antibiotic you can give if you sheep or goat appears to be getting sick. Changes in climate and weather can make animals sick or stressed and a preventative shot will typically help.

“There is no cookbook recipe that will guarantee you won’t have fungus or stress because it does depend on the individual animal,” Bounds says. “But if you’re taking necessary precautions in terms of disease prevention you’ll have a better show season.”