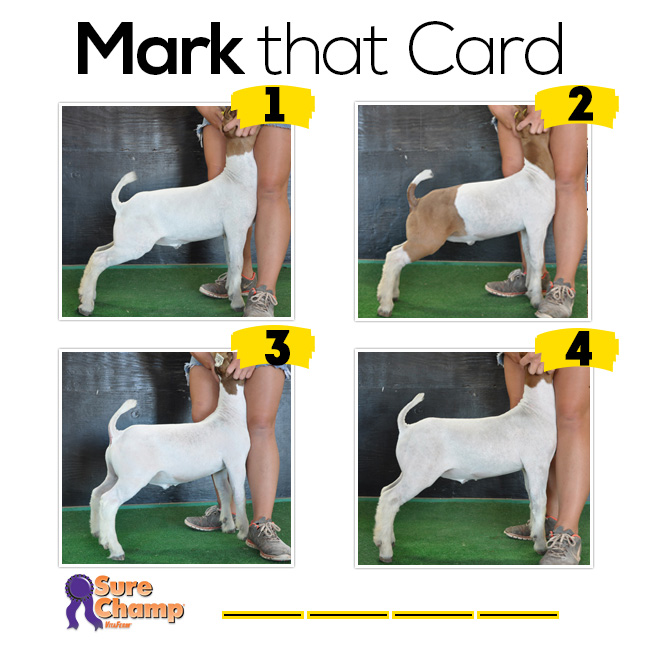 I like the prospect market wethers 2431. In a class where quality is certainly not an issue, there’s still an outlier in the paint goat, not only for his look, but also for his added shape and dimension. The stout featured wether compliments his bold rib cage and undeniable width while still being balanced and attractive from the profile. With that in mind, I still appreciate what 4 has to offer, he’s a long patterned, square built wether that is longer and leveler in his pin set with a more correct set to his hock and pastern, but when competition is this tough, you start to get critical and the plainer muscled wether appears to be flatter in his kind, I like him second.

Even still, in my intermediate pair of wethers that offer some give and take, it’s the little things that separate them, but for me 4 still gets the nod. Here’s one that’s hard to pick a hole in from the side, as he’s the stronger topped wether that blends in neater at the point of his blade, and from a muscularity standpoint I still think he offers more than enough shape throughout to edge the pair. Now, I wouldn’t argue with one who chooses to stand behind the width and power of 3, because there’s no doubt that he ties a bolder, more productive ribcage into a stouter pin set, and a more dimensional stifle. But the coarser made option that gets underneath himself, brings forth the most question marks in terms of the future outlook of his skeleton; I left him a close third.

However, if we’re just weighing out the positives, I think 3 just has more to offer. He’s the longer bodied, more extended option that couples his added growth while still being opened up at the base of his skeleton. Now, I’ll be the first to admit that 1’s another square built, stout featured wether that’s dimensional in his own right, but it’s unfortunate that he’s also the short bodied, steep hipped wether that concerns me from a maturity standpoint, he goes 4th.