Cancelled. Postponed. Rescheduled. Relocated. These words became part of our weekly vocabulary this spring and summer as the pandemic of COVID-19 altered the normal rhythm of our lives. What didn’t change? The hard work, perseverance and commitment that many families in barns across the country put in day after day in hopes that some shows would happen and appreciation for the new shows that were planned at a moment’s notice along the way.

College sophomore Kassidy Bremer had her sights set on her final major show of her junior career with a steer she and her family worked on all spring and summer long, fondly called DJ. Bremer said there were times she and her family were uncertain he’d get shown in Kansas City, but the Royal did happen, and the steer was named reserve grand champion – the second time in four years Bremer has earned that honor in Kansas City.

“I love Kansas City, the city and the people! I’m very blessed that I did so good for my last trip there. I’m grateful that they had the American Royal. My family and I thought this was the best steer I have shown there,” Bremer said.

Bremer is very grateful for the staff and volunteers that made the American Royal happen. She is excited that she was afforded the opportunity to show and succeed during a pandemic. However, she noted several differences between her victory this year compared to that in 2016, besides the obvious of the mask wearing. She said the memory of being selected reserve grand four years prior will always be special because of fanfare involved. This year’s judge kept his distance, announced the winners over the microphone and congratulated the exhibitors with a fist bump, a ritual most judges have employed this year.

“Four years ago was the first time I did good at a major, and so that kind of set the precedence for what it is really like for when you do win at a major show, so it was different because back then you got a slap and handshake,” she said.

Bremer said she experienced the most notable differences at the sale of champions, perhaps a highlight for any young person at a major livestock show. She has participated in the sale numerous times with her steers that either won reserve champion or placed first or second in class. Over the years, she has enjoyed the pre-sale camaraderie of the one to two hours of socializing with fellow young people, potential buyers and supporters of the American Royal. In 2016, her steer was on display for the supporters to view. This year, she said they had less than an hour to visit with and thank supporters, and the only thing on display was a sign with her name, not her steer.

“The sale was the big, big difference from four years ago to last week because they set up panels and you could tie your steers up the panels and all the buyers could come in and see your animals. You could socialize, give handshakes and give hugs in the sale ring. The buyer would come in the ring after they bought your animal and take a picture with you and go to the backdrop and take a picture with you. This year, not very many buyers came through, which either they weren’t there or they either didn’t feel comfortable,” Bremer said.

One of the best things about the American Royal sale for Bremer is the relationship she has built with her buyer over the years, Mariner Kemper. Kemper purchased her reserve champion steer the first time, her class winning steer last year and again this year. Even though travel kept Kemper from attending the sale in person, a colleague represented him, and Bremer was thankful for his continued support throughout her showing career.

The Making of a Champion

Champions are not merely born. It takes months of preparation, a good health and nutrition program and diligent work on hair and skin, and that’s just for the animal. The exhibitor has to have the drive to practice his or her skills, work hard every day and practice, even when there might be other more exciting things happening outside the barn.

Bremer gives her family a lot of credit for helping care for DJ while she has been at school. She said getting him to look good has taken extra effort since they haven’t had a cooler to keep him in. He’s been rinsed twice daily, kept under fans and brushed a lot to get his hair to grow. To keeping him healthy and growing, Bremer relies on supplements from BioZyme® Inc. to help her #preptowin, including Sure Champ® Cattle and various Vita Charge® products.

The Vita Charge line is a fast-acting, multi-species livestock supplement for use during stressful times when livestock need protection or assistance in recovery. The Vita Charge product line offers versatility, like the Stress Tubs and Gels.  Both Vita Charge and Sure Champ contain Amaferm®, is a prebiotic designed to enhance digestibility by amplifying the nutrient supply for maximum performance. It is research-proven to increase intake, digestion and absorption.

In addition to getting her steer prepared for the winner’s circle, Bremer herself is a fierce showmanship competitor. She actually claimed the Grand Champion Senior Showmanship and Grand Champion Overall Showman titles at the American Royal, the day before DJ was named reserve champion. Earlier in the summer, she placed 4th in both the National Junior Angus Showmanship Contest and in senior showmanship at the VitaFerm® National Junior Hereford Expo, both great and unique experiences as she explains.

“To qualify for Angus, you have to win your state show first, and it is a one-time only showmanship contest. That showmanship contest is in my mind, really, really difficult to do good at. There are kids from all over who are the best from their state. I was fortunate enough to get fourth overall,” Bremer said. “At Herefords, if you are in the top 10, you get to fit your animal, and I absolutely love fitting! Last year I won senior showmanship at Maine Junior National, and you had to do the same thing with fitting your animals. I love fitting them and getting to show them and getting to show all your talents you have to offer all at once.”

Thankful. Excited. Grateful. Blessed. These are the words that have been flowing out of young exhibitors and their families late this summer and into the fall as shows have been happening, new shows have been formed, and volunteers, show management and supporters work to make sure young people get to show. For Bremer, it wasn’t a matter of if, but when, and her steer was going to be ready because she and her family fed Sure Champ, EVERY. DAY.

Livestock kids are resilient. No, things aren’t back to normal, but with hard work, good nutrition and the efforts put forth in the barn, victories remain sweet. 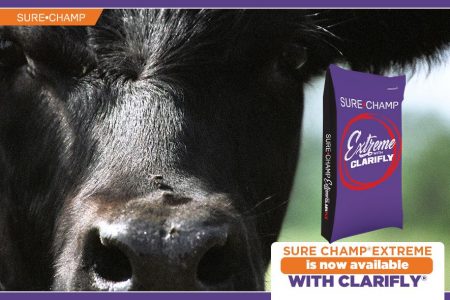 Show livestock get some of the best care possible. At BioZyme®Inc., we want to make sure it stays that way. When springtime temperatures start to climb, another stressor becomes more apparent–flies. That is why BioZyme has now formulated Sure Champ®Extreme with ClariFly®, to combat the elevated temperature and stop flies in their larval stage. SureChamp […]