It’s no secret that once you get your new show prospects home your young exhibitors are anxious to get to the barn, get acquainted and get them show broke. However, with anything worth doing, there is a process that needs to be followed, and when working with little show pig projects, patience and consistency is key.

“I’m a big believer in breaking pigs at a very young age,” said Jackie Lackey, partner at Lackey Livestock in Haskell, Texas, and mother to Weston and Grant, who show pigs competitively across the country. “We have a routine from the start and try our best to remain consistent to mitigate forming bad habits and handling them at a young age has been successful for our family.”

Lackey offers several tips on getting new show pig projects home, getting them tamed down and how to drive them to the winner’s circle.

Lackey said the first week to 10 days their pigs are home, are spent taming the pigs down, getting them used to the people around them and their surroundings. Young showmen Grant and Weston will spend a lot of time that first week sitting in the pigs’ pens with them, just so the pigs get used to them. They also will spend time leaned over the fence or bent down in front of the pens before feeding time to scratch the pigs’ heads, all positive interactions. Once the pigs are used to the people, those people will slowly and gently introduce a whip to the pigs – over the fence and then in the pens so the pigs learn to respect the whip and not fear it. 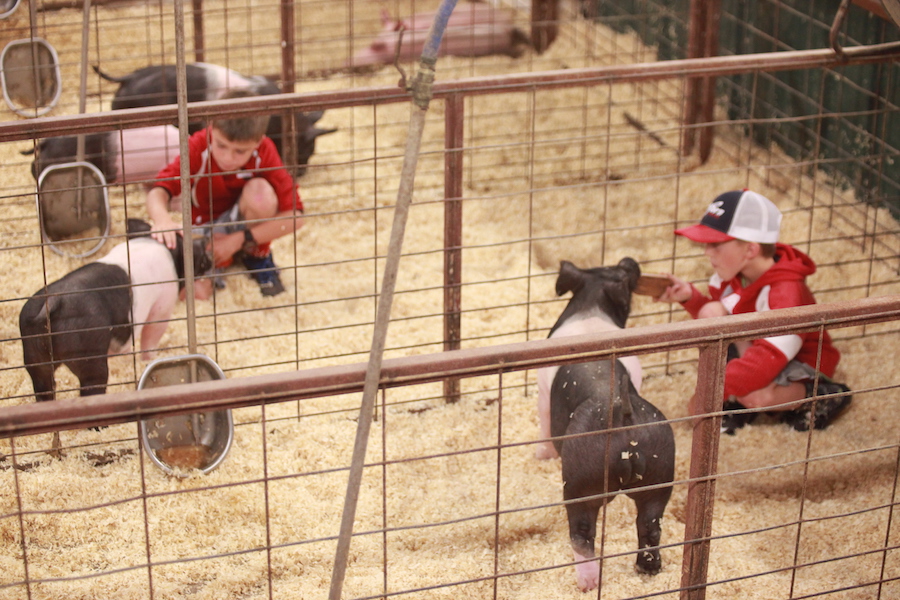 “It is our goal that our pigs have a positive interaction with us every time we walk into the pen. They generally settle down fairly quickly. Regardless of age, every pig in our barn is treated like a show pig,” Lackey said.

“Breaking pigs only gets worse if you have to break bad habits. It is our goal to never create a bad habit – pig that runs, pig that backs up, pigs that fights or bites at the whip, one that wants to get its head down. If you can be patient enough to master one step before the next, you’ll save yourself a lot of time in the long run,” Lackey said.

Once the pigs are tame, the Lackey family begins their daily driving lesson. Their daily routine includes driving the pig directly from its pen to the wash rack. Every time the gate opens, the pig’s head should be up just as if they were walking into the ring at a show, never letting their head down or allowing the pig to run. They rinse them each time they get out of the pen with gentle flowing water in the wash rack. Then, they take them for a few laps back and forth down the center aisle of the barn, using the whip gently. Weston and Grant work to teach the pigs to respect them and the whip by staying in the center of the aisle, and not getting too close to pens on either side of them.

The pigs have become tame, are used to the young exhibitors, and have learned to drive from their pen to the wash rack. Now its time to get them show ring ready and master the art of using the whip. Lackey said they have a large grassy area outside their barn where they take them to learn to walk in big circles and build stamina for the bigger Texas majors. It is imperative for those pigs to take long strides and make big laps; just like they should in a show ring. 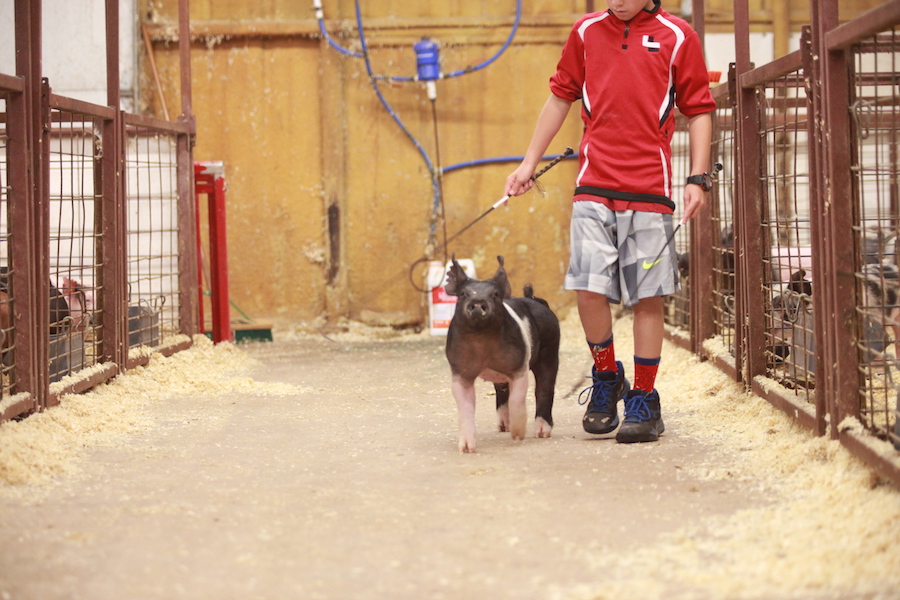 The Lackeys do not recommend small pens or tight spaces to walk your pig. They need to learn how to get out and move, extend and use their rear leg. Confining them to small spaces makes their pace choppier and creates a bad habit for both the exhibitor and pig of turning too tight.

When you do start walking your pig in big laps in a big exercise area, it is fine to use two whips to help maintain control. This will help the pig learn to walk in a straight line with its head up. Often times when smaller kids have to reach over the top of a pig with one whip in an effort to get their head up, they aren’t tall enough to do so and so the pig turns into the exhibitor and breaks his natural pace of walking forward.

Another tip the Lackeys feel strongly about is rewarding good behavior. “If pigs get out and do a great job, even if for only 3-4 minutes, they put them up. We don’t wear out our pigs.” Often, exhibitors will have a goal to walk their pig for a set amount of time rather than only walking them to a point where they know they’ve done well and responded to what the exhibitor asked of them. A young pig may not be able to withstand that much exercise and so it begins to fight and get tired. This immediately teaches bad habits and leaves room for new problems to begin. A pig that is exercised consistently should build enough stamina to last however long is needed in the show ring,” Lackey said.

Lackey said the quality of exercise is more important than the length of the time you spend walking your pigs each day, and that adding exhaustion to both the pig and the kid only makes things worse so work your pig until you’re satisfied you both have done a good job, then reward it by putting it back in it’s pen to prevent those bad habits from forming.

Another thing she really works on with her own kids is positioning the whip correctly, which can help break the bad habit of a pig walking with its head down before it starts. The whip should be parallel with the side of the pig’s face or underneath its chin to help keep its head up. And you should never hit your pig hard enough to hear the whip.

“In today’s show ring environment, you can’t compete successfully if your pig doesn’t walk with its head up, but it needs to be natural. Teaching a pig to drive that way starts from the beginning. I know our pigs are broke when they walk out confident and comfortable with their head up and respond to the boys without them really having to touch them at all with the whip,” Lackey said.

Finally, keep it fun and make sure that everyone involved is patient. If a parent isn’t a patient person, find a mentor or someone who is patient to help coach your young exhibitors. And don’t be afraid to help your kids out; remember it’s easier to prevent habits than to break them. 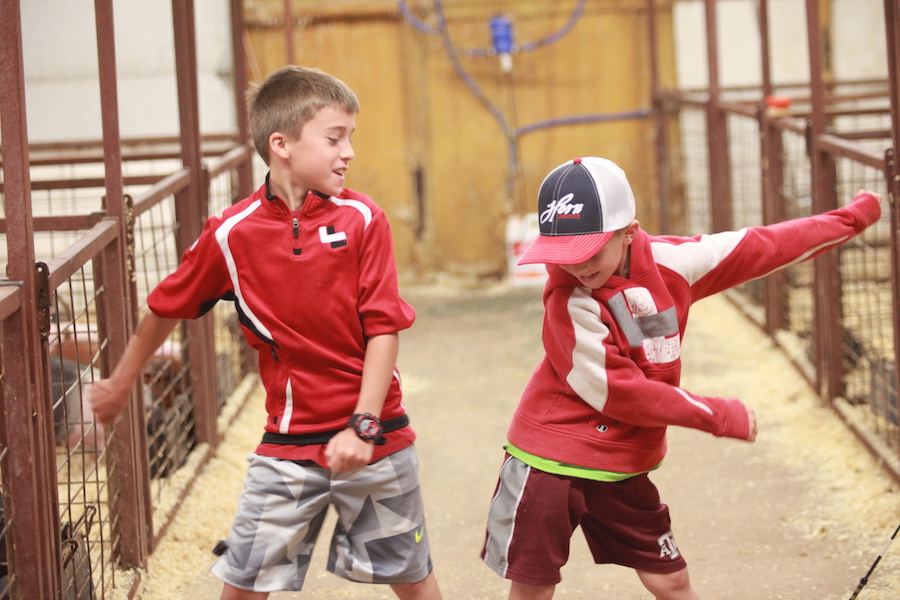 “When pigs get frustrated and kids get frustrated it is no longer fun and we’re no longer productive,” Lackey said. “The key to raising pigs that drive like rock stars in the ring is doing it right from day one, aim for positive experiences for both the kids and the pigs each time you get them out and remaining consistent the whole way through.”

For more information about feeding your pig and supplies you need for your show pig, visit https://surechamp.com/getting-started-with-show-pigs/.