Good health starts in the gut. If your digestive tract is healthy, the rest of your body should be healthy, and that is true for humans and animals alike. However, you don’t always have control over your environment, what or who has been in your space before you, and that is why it is vital to take a hands-on approach to health.

Tyler Cates is the third generation to work on his family farm, Cates Farms in Modoc, Ind. The Cates family is well-known for raising, selling and showing high-quality Shorthorn cattle across the United States. And part of the challenge of hauling strings of cattle to shows across various climates is keeping them healthy and eating while on the road.

“I’m very proactive at keeping them healthy,” Cates said. “If I have one that is very slow eating at more than one feeding, the first thing I do is take their temperature. If they aren’t sick, I give them Vita Charge®.”

Vita Charge Gel contains Amaferm® and is designed for all species of livestock. It supports digestive health and promotes feed and water intake during times of stress and recovery. Amaferm®️ is a prebiotic designed to enhance digestibility by amplifying the nutrient supply for maximum performance. It is research-proven to increase intake, digestion and absorption. “I’m a big believer in prebiotics,” Cates said.

Cattles’ immune systems are comprised as they travel to shows. They are impacted by the extreme changes in temperatures, changes in altitude and by the bugs and bacteria left behind by the previous group of exhibitors and animals that were last located in the stalls. There is no way to control a stomach bug or other bacteria, but there are ways to boost the immunity and take a proactive approach to staying healthy.

“You can’t control picking up stomach bugs when you’re going to as many shows as we do,” Cates said.

Cates said he starts administering the Vita Charge at home before he leaves for a show, typically when the cattle are in the chute getting clipped. Three “clicks” of the tube is all it takes. He then makes sure to have plenty with him at the show and gives it to his entire string the night before they show or any time one of them seems like it isn’t eating or drinking like it should.

“It’s so easy to use. At a show where I have 20 head, I just go down the row when they are tied up, and give them each three clicks,” Cates said.

And when the inevitable happens and one does get sick, he makes sure to accompany the treatment with three clicks of Vita Charge to help keep their stomachs right.

“Anytime I treat a sick show animal with a sulfa bolus or any antibiotic, I give it three clicks of Vita Charge. Those antibiotics are killing all the bugs in the stomach, both bad and good. I usually will give prebiotics when I’m treating the animal and then another round of prebiotics the next morning. It doesn’t cost any more. Even if it’s not helping them, it’s not hurting them,” Cates said.

In addition to using the Vita Charge during times of stress and recovery, Cates feeds Sure Champ® Cattle to his show cattle daily. Sure Champ Cattle is a vitamin and mineral supplement that also has the Amaferm advantage to help stimulate appetite and optimizes the health of your animals.

You can’t always prevent illness, but with preventative measures like vitamins, minerals and a boost to your immune system, you can significantly decrease your chances of getting the nasty stomach bug. The same is true for your show livestock. 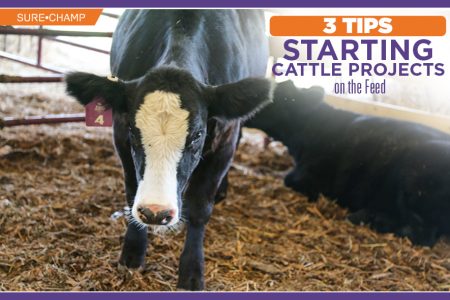