Bringing home new show animals and getting them settled in the barn is exciting for young exhibitors and their families. However, those feelings are not always shared with the livestock, as the animals more than likely are feeling stressed and anxious. They are in an unfamiliar environment with new people and other new animals. Livestock are truly “creatures of habit” and the changes, even slight ones, can cause them to have a disruption in their feed and water intake.

Since water is the most vital nutrient, getting your animals drinking in their new environment is a top priority. And once your animals are drinking, an increased appetite should follow. Since the goal of your show livestock is for your animal to grow and perform, you want to make sure your animal starts to eat as soon as you bring it home. That’s how the Vita Charge® line of supplements can help.

Regardless of the specie, every new show project you bring to your barn, should get a dose of Vita Charge Gel as it is being unloaded from the trailer or the popper. The gel is designed for all species of livestock and supports digestive health and promotes feed and water intake during times of stress and recovery. Amaferm®, is a prebiotic designed to enhance digestibility by amplifying the nutrient supply for maximum performance. It is research-proven to increase intake, digestion and absorption. Vita Charge Gel also contains MOS to trap and expel pathogens, limiting their ability to do harm, and it does not interfere with antibiotic use.

“Amaferm helps feed the gut and keeps it working properly during high periods of stress. Those microorganisms within the digestive system, where 70% of the animal’s immune response system is found, are damaged during high periods of stress, and Amaferm helps compensate for that damage,” said Blaine Rodgers, BioZyme® Show Livestock Business Development & Field Support.

Rodgers suggests administering Vita Charge Gel anytime an animal faces stress, like traveling to a show, receiving treatment or vaccinations or changing feed rations. In addition to the Vita Charge Gel, BioZyme® manufactures other natural Vita Charge products to help livestock recover from stress, to keep them eating, drinking and performing to help you achieve your goals.

Vita Charge Stress Tubs are an ideal way to get the Amaferm advantage into your show steers and heifers daily with limited handling. They come in a convenient 50-pound size and contain Amaferm and MOS to support the ability to recover from the effects of stress. The Stress Tubs include organic Zinc, the antioxidant Vitamin E and B vitamins. Not only does the Stress Tub offers benefits to the cattle, the way it’s consumed will help the animal too.

“One of the reasons the stress tubs help stimulate appetite is the way they are consumed through the licking process and salivation. The saliva helps stabilize the pH in the stomach, so it keeps the digestive tract working even better. There are lots of studies that show saliva increases appetite so there is actually another function to the products we make – not just product itself, but the way it is consumed,” Rodgers said.

The Vita Charge Stress Tubs are also convenient enough that exhibitors will take them to shows so that their cattle have the constant source of Amaferm they are accustomed to. Cattle can enjoy the tubs in the stalls or in tie-outs to keep their appetites working while on the road.

Vita Charge Liquid Boost is another great way to boost your animals’ feed and water intake, especially under stressful situations like acclimating them to new surroundings. Perhaps the most versatile of the Vita Charge line, Liquid Boost can be administered via a medicator, mixed with water, used as a drench or top-dressed on feed. It is designed for all species, and the palatable flavoring helps create consistency in taste of any water source.

Many people add Liquid Boost to their medicators for about two weeks after bringing home new pigs. They also give pigs, lambs and goats Liquid Boost 2-3 days prior to traveling to a show, while at the show and 2-3 days after getting home. It will mask the chlorine taste that is often found in town water at the shows.

“Getting your show projects started on the right foot is so important for them to stay healthy, keep gaining and help you reach your end goal, hopefully in that winner’s circle,” Rodgers said. “Get them started on the right track by boosting their appetite and immunity with the Amaferm advantage found in the Vita Charge products.” 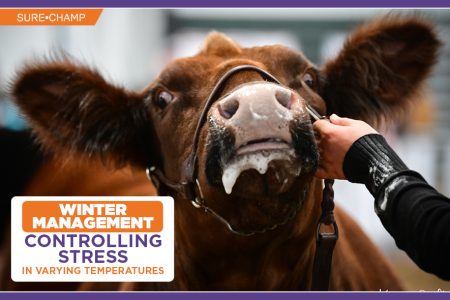 As we move into winter, it is hard to know what the temperatures are going to be like. You might be bundled up tight for morning chores, but by noon are ready to start shedding layers as the sun warms us up. Imagine being a haired up show animal during this same time frame, except they can’t […] 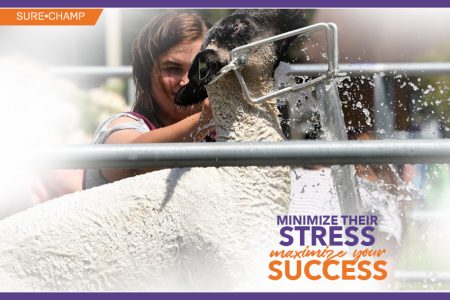 Stress. It is in our lives every day. Some stress can have a positive effect but more times than not we think of stress as something that causes a negative reaction to our bodies and minds. Just like humans, animals also experience their share of stress; however, they react differently to stress, often going off […]