Thank you Blinn Livestock Judging Team for providing placings and officials for this class.

I sort the Hereford Bulls 2134.  Look in on the 12th, it’s a good set. Even then, the red necked, conservative marked 2’s got to start. Breed basics of build and body will keep your cattle functional, but then, he comes with the extra tangibles of neck set and levelness of hip to throw high quality, attractive show heifers. 1’s practical and he’s built to last… I just don’t think the deeper chested, shorter necked sire comes with near the look.

That’s what makes the middle close, because he meets a bull who draws up with the look of my winner, but I’ll give some of that up to use the more practical option.  The bigger footed, deeper heeled bull is actually better in his shoulder angle and takes the more durable step out of his hind leg, that’s why I’d rather bet on his kept daughters to last longer. But don’t get me wrong, 3’s worth taking a chance on. With that kind of front end that opens back into a big topside and giant hip, he could be a changer. He’s just more up right off both ends of his skeleton; I think the higher flanked, tighter hocked bull’s holes will be harder to cover.

But it’s worth the extra risk on bottom, because his out there look comes with way more shape to breed on.  Don’t throw the long feathered 4 away, he’s a functional, good bodied bull that’ll work on almost any cow base, but I just never saw his plain front and narrow construction ever being a contender in this solid set. 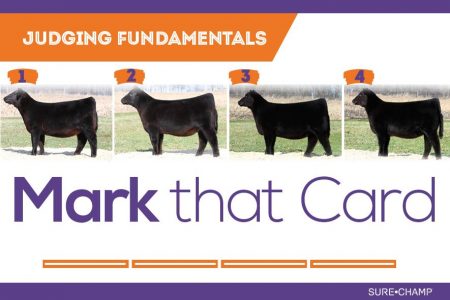