Wouldn’t it be nice if every livestock show was just a short drive from home? And wouldn’t it be even more ideal if we could haul our livestock in 55-degree weather with no humidity, no storms, and dry, clear roads? Unfortunately, there is no “utopia” for hauling livestock to shows, even if you live 20 minutes from the show, you have the possibility of a flat tire or a re-route due to somebody else’s unfortunate accident. That’s why we’ll be exploring the topic of hauling livestock in the next few weeks.

With winter jackpots and major livestock shows like the National Western and Fort Worth around the corner, it’s time to think about traveling to shows in less than perfect weather conditions. For life-long Angus producer and exhibitor, Randy Stabler, Pleasant Valley Farm, Brookeville, Md., the keys to a successful trip in adverse weather include a well-planned trip combined with regular vehicle and trailer maintenance.

Stabler, who typically takes a pen of Angus bulls, along with several Angus heifers and bulls for the “hill” to Denver and a string of Limousin cattle for his son-in-law’s family, will haul cattle in a semi while tack and supplies travel in an accompanying pickup and gooseneck trailer. The key, Stabler says is to make sure all vehicles and trailers are well-maintained and prepared for the conditions he will be traveling in.

“Our own operation has been afforded the opportunity to have very up-to-date, newer model equipment that doesn’t necessarily have a lot of miles or age on them, but with the state of the ag economy, we are going to push them further and harder and will need to put more maintenance in them because we aren’t going to be able to buy them as often as we used to,” Stabler said.

“Maintenance is going to be more important than ever. We won’t just load the cattle up and take off and go. Although we stay focused on maintaining all of our equipment, a load of grain can stay broken down on the side of the road. Where with livestock, there becomes a time issue and health issue and a little more pertinence, so we don’t want to break down. Before we leave for a trip, the truck and trailer are gone over to make sure it is worthy to make it from point A to point B. If it needs tires, or filters or hoses, we replace those.”

And if regular maintenance isn’t enough, Stabler carries extra parts and tools with him, just in case. He doesn’t necessarily carry a spare tire for the semi because if any of those tires are questionable, he will replace them before the trip. However, he does carry two spare tires for both the pickup and gooseneck, along with an assortment of tools, hoses, filters and belts.

“Preventative maintenance definitely helps. You don’t want to be out there with a trailer and a wheel baring goes out or the wiring goes out in the trailer. You’ve got an obligation to be safe around other drivers too,” Stabler reminds.

Well before the cattle and tack are loaded, the family and crew at Pleasant Valley Farm have monitored the long-range weather forecast, contacted friends and colleagues in the Midwest and planned their route and travel itinerary to travel the slightly more than 1,700 miles from their farm in Maryland to Denver, Colo. They are fortunate in the fact that they have two primary routes with Interstates 70 and 80 being accessible to them at both ends of their travel, and the distance only varies 30 to 40 miles between the routes, so if they do see a bad storm forecast for Nebraska or Iowa during their trip, they can take the southern route of I-70 instead of their usual route along I-80.

Once the Stablers have checked the weather and determined their route, they contact a place to layover at about a half-way point. Stabler said he looks for a place that is fairly accessible where he can unload the cattle and they can run loose for about 24 hours, and where his crew can get some rest themselves.

“I want the cattle to be off the trailer twice as long as they’ve been on. If we’ve been driving 12 hours, they get off for 24. It’s the first thing we do when we stop before we even take care of ourselves. We hay, water and give them a little feed. I want them to be comfortable,” he said.

Stabler said he tries to arrive at his layover stop during daylight hours even if it means leaving home in the dark. He wants to respect the place he is stopping at, and he has found he has fewer challenges unloading cattle in an unfamiliar place during the daylight.

Part of his plan is also making sure he has plenty of extra feed and hay and planning some extra time in to his travel in case an unpredictable storm blows in during his trip. Although, with extra expenses incurred with hotels and food, he said his family and crew has invested a lot of time and energy in the cattle and getting them safely for the show and sale makes that extra time and expense worth it.

“No matter what your best plan is, you need to have a little bit of hiccup room built into your plan. We try to leave 1 1/2 to 2 days built into our plan, in case the weather is bad, or we do break down, we still make our destination on time. That’s costly, hard to plan and hard to do, but a necessity. If I leave Maryland and the sun’s shining, and I get to the Mississippi river between Illinois and Iowa and it is snowing and 50 below zero, we might have to stay over an extra 12 hours just for a break. And, I have left home a day or two early to beat a storm,” Stabler said.

Part of his plan is to make sure his trailer is bedded adequately, and can have the vents both open and shut, depending on the outside temperature. He has traveled to Denver when it’s 45 degrees below zero and 45 degrees above, and the cattle needed the vents both shut and open – all in the same trip.

Upon arrival at his destination, his crew gets the cattle out, gets them fed, gives them hay and water and makes sure they are in good health, all with plenty of time to get rested and filled before show and sale days.

“Transporting livestock is going to become more important than ever,” Stabler said.

Another resource that makes the long haul easier on cattle – or any species – is a Vita Charge® supplement with the Amaferm® advantage. Vita Charge® Gel and Vita Charge Liquid Boost® are two multi-species supplements that help livestock recover and stay on feed and water during times of stress, like long-distance traveling in adverse weather. Both products contain Amaferm, is a prebiotic designed to enhance digestibility by amplifying the nutrient supply for maximum performance. It is research-proven to increase intake, digestion and absorption. 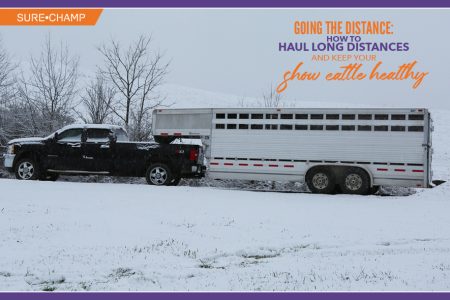 When you have a passion for your industry, you’ll go to great lengths to make sure you are an active participant. Even if that means driving 20 to 30 hours across the country with a load of animals to show livestock. With a vast number of major stock shows and junior nationals in the Midwest, […]